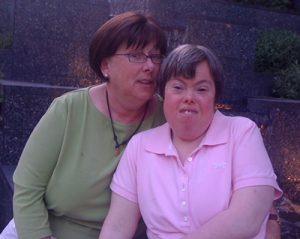 The following article first appeared int eh May 3 issue of The Monitor.

A promise must never be broken…. Alexander Hamilton.

The founding father, when he uttered this maxim, could have had no way of knowing his words would be fulfilled by a modern-day Catholic of the Diocese of Trenton.

Jane Boyle, a member of St. Mark Parish, Sea Girt, has completed her long-standing pledge to the Faith to Move Mountains campaign, both to keep the promise she made and honor the life of her late sister, Ellen.

Jack and Eleanor Boyle moved their family from Newark to Sea Girt about 40 years ago, joining the Monmouth County parish. Their daughter, Ellen, was 12 and had Down’s Syndrome, but elder sister, Jane, remembered St. Mark’s as a welcoming home for the child with special needs.

“At the time, Msgr. [William] Carton, pastor, and the entire parish wholeheartedly embraced Ellen,” Jane said. “She was included in everything. She was loved, she was valued and she was cherished there.”

Jane, who lived and worked in northern New Jersey, often returned to visit her family, and witnessed first-hand the important place in Ellen’s heart that St. Mark’s filled… and vice versa. Having studied the role of acolyte diligently, young Ellen was proud to participate in the ministry during Mass.

“She was proud to have her own altar server robe and took meticulous care of it. “She would arrive early and ‘high five’ the priests, ushers and congregants. There was no limit to the joy she and others experienced when she served Mass.”

In addition to three decades of service at the altar, Ellen was an active member of the diocesan Holy Innocents Society, an educational program for those with intellectual or developmental disabilities, which met at St. Mark Parish.

“She faithfully went every Saturday,” Boyle said. “She loved the classes and the related activities… worked hard at learning the lessons taught, was often a reader at Holy Innocents Masses.

“Ellen could not verbalize her faith,” Jane continued. “She simply lived it and demonstrated it every day in acts of love and kindness, innocence and truth.”

Ellen also enjoyed a full life in the community, graduating from high school at 21, working for a decade in food service and retail, and attending day programs competing on sports teams and the Special Olympics.

With the death of parents Jack in 1990 and Eleanor Boyle in 2012, Jane realized the mantle of responsibility for her sister’s care now rested upon her shoulders. She relocated to Sea Girt and became Ellen’s legal guardian. Through a mailing from the parish from pastor Msgr. Sean Flynn, Jane learned of the Faith to Move Mountains diocesan campaign and realized its importance to St. Mark’s and the Diocese at large.

“I quickly concluded this was an initiative to secure financial stability of the Diocese,” Boyle said. “As members of the parish – a place that had been central to Ellen’s life for four decades and that had been so important to my mother and father – I simply felt a responsibility to participate.”

But life has a way of testing our earthly resolve. Ellen was diagnosed with early-onset Alzheimer’s Disease shortly after Jane made her pledge, and Jane’s focus changed. She recalled, “As a single, working person, my primary concern was ensuring that I could meet [Ellen’s] needs through the challenges that were ahead of us. I held the pledge reminders aside knowing that, as soon as I could, I would make good.”

With the aid of God’s providence and home health care workers, Jane was able to care for Ellen in her home until her death this past Jan. 21 at the age of 52.  Long-time friend and neighbor, Father John Butler, now pastor of St. Michael Parish, West End, was principal celebrant at her Mass of Christian Burial; Ellen had served as acolyte at his first priestly Mass.

Ellen’s battle concluded, Jane’s faith urged her to fulfill her F2MM pledge. On March 4, Boyle enclosed her final pledge installment in honor of her beloved sibling.  “I suppose you could say making this contribution was both an act of duty and an act of gratitude for the wonderful life my sister Ellen, and my parents before her, had as members of St. Mark’s and the Diocese of Trenton,” she said.

In a letter accompanying the check and addressed to Bishop David M. O’Connell, C.M., Jane paid tribute to her sister and outlined the woman’s journey of faith and triumph over disability. She wrote:

“I want you to know that my pledge is now fulfilled. I also want you to know about Ellen. She was a genuinely special person and truly a gift from God. Ellen lived a very important and consequential life, touching everyone she met as she embodied Gospel values of love and joy, innocence and truth. I was beyond blessed to be her sister for 52 years.

“I thank God she was safe and home to the end, and is now truly safely home.”

Caption to Photo:  Jane, left, and Ellen Boyle of Sea Girt were longtime parishioners of St. Mark. Jane fulfilled her pledge to the Faith to Move Mountains campaign after Ellen’s death. Courtesy photo