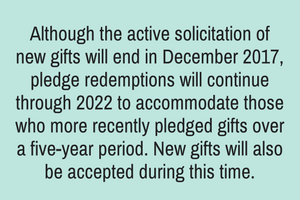 As the Diocese and its parishes enter the homestretch of the multi-year endowment campaign, Faith to Move Mountains, there is much cause for gratitude.

As of Sept. 5, 22,709 donors from the Diocese’s 107 parishes across Burlington, Mercer, Monmouth and Ocean counties have pledged nearly $70 million – about 94 percent of the campaign’s $75 million goal. Of the almost $70 million, more than $31 million has been collected to date, and 38 parishes still are in the campaign process.

“While the goal of $75 million seemed a stretch of what was possible in the beginning, achieving $70 million at this point shows the willingness of our good people to invest in their own future,” Bishop David M. O’Connell, C.M., said in acknowledging the generous response of parishioners toward the campaign. “In addition to their generosity and commitment, the efforts of many pastors and the diocesan Department of Development staff bear witness to the importance of this initiative, the first of its kind in the Diocese of Trenton since 1992. We will continue with our efforts through December, 2017.”

In addition to helping the Diocese meet its long-term needs to better serve the faithful, Mariann Gilbride, the Department of Development’s associate director, offered how Faith To Move Mountains benefits the parishes, too.

She explained that a parish will receive 30 percent of every dollar collected up to its campaign amount. Should a parish collect over its goal amount, 70 percent of the overage will be returned for local needs and priorities.

She also noted that each parish was asked to submit a case statement indicating how the return money would be used. The majority of the parishes are looking to reduce debts, make improvements to buildings and grounds, develop new ministries and update technology. Gilbride said that to date, $8.5 million has been returned to parishes. The most recent rebate alone was more than $2.4 million.

You can learn more about the Faith to Move Mountains campaign in this story from The Monitor.